To
The Secretary,
Department of Posts’
Dak Bhawan, New Delhi-110 001

1.         The Finance ministry has constituted an implementation cell which will function as the Sectt. of the empowered Committee headed by  Cabinet Secretary in which  Secretary , Department of Post is also a member.

2.         As per the minutes of implementation cell held on 2nd February, Nodal Officers from our Department has not attended, it is reliably learnt.

3.         The implementation cell has fixed two weeks time for submission of any Departmental specific  Modification on 7th CPC recommendations but it is  learnt  that Nodal Officer appointed  by the  Department is out of Delhi and will be returning after 12th February , by that time, there will be  4 days time left  for cutoff date fixed by implementation cell..

4.         Further minutes says that any modification recommended by the Secretary Posts should be approved by the Minister (C) also before submission to implementation cell. We feel that if action is not taken on war footing it will be impossible for the Postal Department to submit modification proposal to the implementation cell after completing all the above formalities before the cutoff date

5.         Regarding  Cadre Restructuring  also if orders  are not issued before implementation of Pay Commissions report, there is every chance of returning the proposal by DOP&T  for  resubmission after signing fresh  agreement  taking in to consideration the 7th CPC  orders issued  by the Government.

In view of the above we request you to kindly act immediately to safe guard the interests of Postal Employees without giving room for any delay or omission or commission on the part of Postal Department.

To
All Constituents of NJCA
Dear Comrade

The NJCA met on 08.02.2016 as scheduled. The meeting after taking into account various factors decided that the proposed indefinite strike will commence from 11.04.2016 if no settlement is brought about on the charter of demands by that time. The meeting also took the following decisions.

1.    Strike notice will be served by the NJCA and all its constituents on 11.03.2016 by holding massive demonstration.
2.    There will be a massive Rally on 11.03.2016 at Delhi and leaders of NJCA will make it possible to attend the said rally and the strike notice will be served on Cabinet Secretary, Government of India.
3.    All the National JCA leaders will attend Rally at the State Capitals/big industrial centres during the month March and April, 2016. Dates will be finalised in consultation with the concerned State JCA.
4.    To strengthen the campaign, the NJCA will place on the website a pamphlet explaining the demands.
5.    Posters will be centrally designed and kept in the website for State JCAs and constituents to adopt.
6.    All Constituents will undertake independent campaign programmes in the month of March 2016 to popularize the demands.
7.    29th March will be observed as solidarity day throughout the country unitedly by all the Constituents of NJCA.
8.    The indefinite strike will commence at 6 am on 11.04.2016.
9.    The updated Charter of Demands on which the indefinite strike is to be organized is enclosed.
10. The Constituent organizations may add sectional demands as Part B of the Charter of Demands of the NJCA
The National JCA appeals all constituents to make intensive campaigns to make the strike an unprecedented success.
With greetings,
Yours fraternally,
(Shiva Gopal Mishra)
Convener
Charter of Demands
1.    Settle the issues raised by the NJCA on the recommendations of the 7 CPC sent to Cabinet Secretary vide letter dated 10th December 2015
2.    Remove the injustice done in the assignment of pay scales to technical/safety categories etc. in Railways& Defence, different categories in other Central Govt establishments by the 7 CPC
3.    Scrap the PFRDA Act and NPS and grant Pension/family Pension to all CG employees under CCS (Pension) Rules, 1972 & Railways Pension Rules, 1993
4.    i) No privatization, /outsourcing/contractorisation of governmental functions
ii) Treat GDS as Civil Servants and extend proportional benefit on pension and allowances to the GDS
5.    No FDI in Railways & Defence; No corporatization of Defence Production Units and Postal Department.
6.    Fill up all vacant posts in the government departments, lift the ban on creation of posts; Regularise the casual/contract workers
7.    Remove ceiling on compassionate ground appointments
8.    Extend the benefit of Bonus Act,1965 amendment on enhancement of payment ceiling to the adhoc Bonus/PLB of Central Government employees with effect from the Financial year 2014-15
9.    Ensure Five promotions in the service career of an employee
10. Do not amend Labour Laws in the name of Labour Reforms which will take away the existing benefits to the workers
11. Revive JCM functioning at all levels
________________________________________________________________________
To
Cabinet Secretary,
Government of India &
Chairman,
National Council/JCM
Dear Sir
Subject: 7th CPC recommendations – Reg.
We have written under the cover of the NJCA’s letter in No JJCA/2015/7th CPC dated 11th December 2015 our comprehensive suggestions for effecting changes in the recommendations of the 7th CPC. This was also subjected to discussion with the JS (A) of DOPT on 11.12.2015 in response to the letter in No 3/1/2015-JCA dated 10-12-2015.
We request that the same may be treated as the consensus view of the Staff Side, JCM/National Council.

Thanking you,
REPLY FROM THE DEPARTMENT

VERIFICATION OF MEMBERSHIP FOR RECOGNITION OF SERVICE ASSOCIATION UNDER CCS (RSA) RULES, 1993-REGARDING. 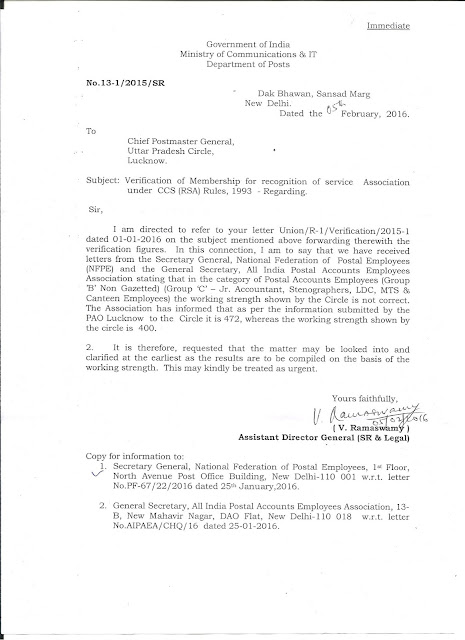 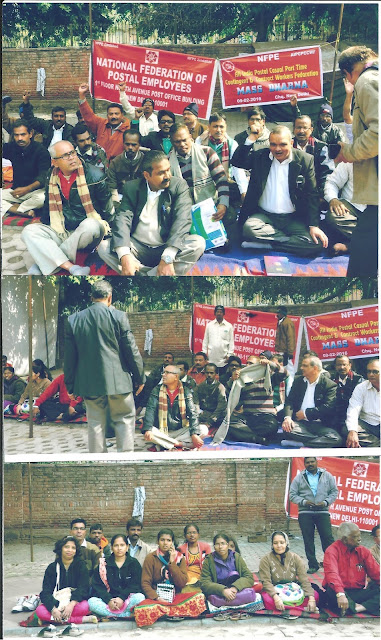